To say that May 25, 2020, is a date that has astronomically shaken the world would be understating the intensity of what we are experiencing in our communities. At this very moment, protests are happening across the country and for good reason. George Floyd was murdered in cold blood, in broad daylight by Minnesota policeman, Derek Chauvin. Chauvin held his knee to the left side of Floyd’s neck for 8 minutes and 46 seconds. In a video that has been widely circulated on social media, you can hear him repeating “Please”, “I can’t breathe”, and “Don’t kill me”. It’s a scene that I can barely watch without my heart sinking.

The four officers involved in the murder of George Floyd have all been terminated. One of them has been charged with murder in the third degree. With the evidence being crystal clear, why is it taking so long to get justice? The number of Black men and women that have lost their lives due to police brutality continues to climb at an alarming rate. People of all colors are taking to the streets to declare, once again, that BLACK LIVES MATTER.

Since the tragic murder of Trayvon Martin in 2012, we have been demanding justice. I still feel angry when I think about George Zimmerman still walking freely as if he didn’t senselessly murder an innocent teenager. The movement continues to live on despite other murders of Black men and women. Momentum has been building and tensions have been rising over the last eight years. Protesting and rioting is a result of decades-long abuse, violence, and inequality.

We are an uprooted race that this country had to be “creative” with eradicating. How do you dispose of people who have no home to return to? Think systemic racism affecting employment, mass incarceration, Black women being 2 to 6 times more likely to die in childbirth, gentrification, the list goes on. The dehumanization of Black people has reached its apex and WE. ARE. TIRED.

Speaking of tired, the “All Lives Matter” rebuttal is WRONG and also very annoying. All lives matter, but the lives we are focusing on at the moment are BLACK. If you or someone you know is saying this or putting it on a sign, t-shirt, button, etc. please stop them immediately. It’s possible to stand up for a specific cause/race of people without harming or not caring for another. Because we declare “Black lives matter”, it doesn’t imply that other lives don’t.

We are aware that white lives matter. It’s been obvious for decades. Blue lives matter because they can kill you with impunity. If you’re arguing against the Black Lives Matter movement, you are ignorant to these obvious facts or intentionally arguing in bad faith. People are angry because their voices are not being heard. Some of the stories of these victims have been shrouded in silence. The system being protested has yet to deliver justice.

If you are not Black and have Black friends, check on them. Listen to them and be present. Arm yourselves with the knowledge of our issues to fight against your peers and their ignorance. We need it right now more than you know.

Everyone, PLEASE be safe. We are still going through a pandemic. I don’t want to see more of us die for the cause. Mask up, make sure you practice social distancing, and wash/sanitize your hands regularly. I hope we can all find some peace in these times. 2020 has been exhausting and draining on so many levels so let’s look out for each other as best as we can!

In true Landon fashion, I’m late to the party once again. Recently, I’ve started listening to podcasts. For those of you unfamiliar with podcasts, as I was a couple of months ago, let me explain. A podcast is pretty much a talk radio show. You have some that are dreadfully boring (think NPR, I can’t stand it), and you have some podcasts that are ear candy. One of my favorites is “Kiss & Tell Radio”. Shar Jossell and Jayce Baron have amazing chemistry together and the conversations they have, make you wish you were in the room.

Knowing Shar personally, I can tell you that the girl can talk and is NEVER misinformed. I’ll be posting her show “Shar Says So” here as well. Visit her website SharSaysSo.com. She’s definitely someone you want to check out! When she says she’s “a grown ass woman, with grown ass opinions”, she ain’t lyin’!

Jayce Baron is a writer, social entrepreneur, and advocate for the LGBT millennial. (I got that from his website, but if that doesn’t make him sound absolutely interesting, you’re crazy.) Jayce is handsome, smart and very funny! To learn more about Jayce, visit JayceBaron.com.

These two have one of the best podcasts I’ve heard. If you’re new to podcasts or have never heard one, I’d start here. This is what good podcasts/ good conversations sound like.

So click here to fall in to Kiss and Tell Radio. I have to go catch up on Episode Three! Ciao.

I’m not someone who takes offense easily, but when I do, I get pretty pissed off about it. I watched a video posted by sixteen-year old Amandla Stenberg about culture appropriation. “Culture Approriation” is defined as the adoption of elements of one culture by members of a different cultural group, especially if the adoption is of an oppressed people’s cultural elements by members of the dominant culture. Basically, it’s when White people put dreads in their hair without understanding the cultural representation of them.

Watch this video that Amandla posted. She can explain it better than I can:

The question at the end of this video has haunted me since I first heard it.

“What would America be like, if we loved black people as much as we love black culture?”

Amandla has faced some backlash. (Mostly from people missing the point altogether.) This girl is not stirring up the pot, but rather pointing out black culture. I am also thrown off when I see people who aren’t Black exhibiting Black culture as a fashion statement, but dismiss the social ills coming from that culture. Don’t get me wrong: I love LEARNING from other cultures. But you won’t catch me wearing a bindi, commercial use of Kente cloth or using Chinese characters without respecting the history behind it. It’s cultural appropriation when the culture is watered down, commercialized, and used in a comical manner. Period.

Now before you all start flooding my comments, let me make this clear; This cultural appropriation is not just about Black hair, style, music, etc. It’s about understanding and respecting the culture behind it. I have seen so many people miss the point entirely because their ignorance won’t allow them to see the bigger picture.  It’s not simply about culture, it’s also about the race of the people behind the culture. We’re not just talking about Black people, but people of all races.

Respect the culture, respect the race of people it comes from and treat them like human beings. We have much to learn from each other if we could stop the hate and ignorance we constantly display against on another.

I love to see my fellow Oklahomans doing great things! So am I am super excited to feature Mr. Ray Tennyson. 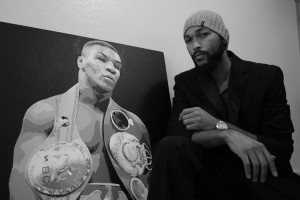 From OKC Thunder players to beautiful couples, Ray Tennyson has made quite a name for himself in Oklahoma City and beyond. Like so many others, I’m a huge fan of his work and I especially LOVE the OKC Thunder paintings! He captures the athletes in a very powerful way. His paintings command your attention and are always immaculate.

As I’m writing this I can’t help but to think of how awesome it must be to see your work on television. I’d freak out every single time. I just want a local news anchor to plug my blog one time. Lol! But this isn’t about me…

I’m not going to show you all everything. I think you understand just how incredibly talented Ray Tennyson is. You’ll have to check out his website to see more of his gorgeous art. If you want a portrait of your own, head over to www.RayTennyson.com for prices. Print of his paintings are available as well! You can also follow him on Instagram (RayTennyson) and follow his process. It’s pretty cool to watch him work. Ray’s passion for art definitely shines through in his work. Thank you, Ray, for continuing to inspire others and adding beauty to the world!

You can also catch him at Studio XII on June 26th at 7pm!

If you have been living under a rock you don’t know about Rachel Dolezal, head of the local NAACP chapter in Spokane, Washington. Dolezal is a White woman who has lived and identifies herself as an African-American woman. Her estranged mother claims that she is “being dishonest and deceptive with her identity”. Dolezal has built a successful career as an expert on and advocate for the black community. Not only is she president of her local NAACP chapter; she is also an academic expert on African-American culture and teaches many related classes at Eastern Washington University.

In my opinion, I feel this entire charade is a well-timed distraction from the recent event in McKinney where an African-American teenage girl was attacked by a White police officer. This young lady has been scarred for life, but we’re more worried about a White woman wanting to be Black and is actually doing some good for our community. Don’t get me wrong, I am not justifying Rachel Doazal’s actions. It’s alarming to see how easily distracted our society is when it comes to things that matter most.

I’m sure most of you didn’t know that Rachel Doazal has also appeared alongside Baltimore City State’s Attorney Marilyn Mosby, who has filed charges against police officers in the death of Freddie Gray, a young black man. Is it a coincidence that this story of her deception in regards to her race is coming to light now? Are we not to believe that those who worked closely with her and her family didn’t know about this? The NAACP is standing by her saying:

To me that says not many members cared (if they knew) about her secret. Her service and dedication to the organization stood out above her color.

Without further digression, I’d like to go on record as saying that a lot of us have small, one-track minds. Our society is so fickle and inconsistent in the things we stand up for and care about. We’re all standing up and protesting for Black lives but we destroy Black lives in the media every day. Developments have been posted about the case of the little girl in McKinney and a lot of us are so busy discussing “the fake Black lady”, we’re losing momentum on a greater issue.

Wake up, friends. The media is playing a game with us and we can’t let them win. Black lives matter and they will always matter. Let’s notbe blinded by the smoke and mirrors. This is all a circus act.